Facts of the matter: Collective Benefits

It is widely acknowledged internationally that collective employment agreements give better pay increases than individual agreements for most employees. They go some of the way to correcting the imbalance of power between employees and employers. This is acknowledged in the Employment Relations Act.

It is widely acknowledged internationally that collective employment agreements give better pay increases than individual agreements for most employees. They go some of the way to correcting the imbalance of power between employees and employers. This is acknowledged in the Employment Relations Act. 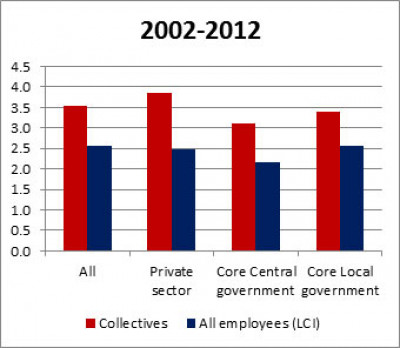 How much better are collective employment agreements? The Industrial Relations Centre (IRC) at Victoria University collates these agreements, and here we will look mainly at those in the state sector.

Multi-employer bargaining is concentrated in the public sector, with 65 percent of what the IRC calls core government employees covered by a MECA.

The also IRC notes that the public sector has about 20 per cent of New Zealand’s employees – but 60 per cent of employees covered by collectives. Government attacks on collective bargaining will therefore particularly hit state sector employees.

In 2012, the IRC could calculate wage movements in 857 collectives covering 205,395 employees, of whom 56 percent were in the public sector (education accounts for 35 percent alone). So the overall average pay outcomes it reports heavily reflect what has been happening in the public sector rather than across the whole labour force.

The average annualised wage increase in collectives in the year to June 2012 was 2 per cent compared to 2.6 per cent in 2011. In 2010 it was 4.2 per cent, though probably a hangover from multiple-year agreements made before the global financial crisis hit.

The best official statistic to compare this with is the Labour Cost Index (LCI). This includes increases from changes in both individual and collective agreements, but not increases for individual performance, skills or experience. There are also LCI measures for public and private sectors, which we will use for comparison, though they may not exactly match definitions used by the IRC.

On the face of it, collective and LCI increases don’t look very different in 2012. This is a break from previous years and is heavily influenced by low increases in the state sector.

Another significant difference is that most employees on collectives get a general pay rise each year.

According to the LCI survey, 43 percent of employees did not receive a general wage or salary increase in the year to June 2012. The number was as high as 56 percent in late 2009.

However for people on collectives, the percentage receiving no increase has been in single figures since 2003 apart from 2012 when it was 11 percent.

Not only do employees on collectives receive higher pay increases, but they receive them more consistently.

This article is from the December 2012 issue of the PSA Journal.

In the week leading up to Budget 2022, and the day after, the PSA hosted a series of webinars, delvi…

After rallying around Aotearoa for a better pay offer, care and support workers and their unions are…