This issue's news-in-brief includes the latest on pay equity for support workers, a tribute to a 'pioneering' former PSA president, and a call for solidarity with Myanmar's workers.

Legislation to extend the Support Workers’ Settlement Act (2017) passed in Parliament in June, ensuring the pay rates and progression framework secured under the Act will remain in place for the next 18 months.

But our members are severely disappointed at the pay increase the Government has decided on – a measly three percent – miles behind the current 6.9 per cent rate of inflation.

This pay rise is a step backwards. It doesn’t come close to meeting the very real increases in the cost of living. 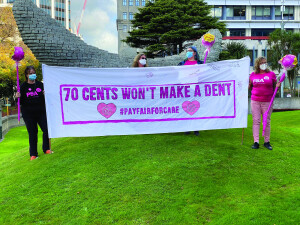 These are extraordinary times and PSA members deserve dignity and respect as they continue their important work supporting vulnerable New Zealanders.

The pay equity claim is a crucial step in addressing the crisis of low pay and insecure work faced by care and support workers.

Our union recently mourned the passing of PSA president and former Minister for Labour and State Services Stan Rodger.

Stan, who died in May at the age of 82, will be remembered as a committed unionist and thought leader within the labour movement.

A minister in the fourth Labour Government, Dunedin-born Stan introduced sweeping changes to the public service that have largely endured to this day.

Stan wore many hats within the PSA: he began as an executive committee member, before being elected vice-president in 1965, and later president in 1970. He went onto work as assistant secretary for research and publicity at the PSA when his presidency had come to an end.

This is my dear friend and mentor Hon Stan Rodger in his first Labour Party Conference Zoom — aged 82. Says a lot about the man and his passion for politics. RIP Stan pic.twitter.com/Hhyt9e4Ya9

"Stan strengthened the research capacity of the PSA in a way that was pioneering for the labour movement at the time,” explains former PSA economist Peter Harris. “His research was extremely high quality and easily understood by an audience of union activists.”

In Government, Stan negotiated the end of a three-year-long wage freeze imposed by Rob Muldoon before introducing the Labour Relations Act (1987) and the State Sector Act (1988).

Both were bitterly opposed by the PSA leadership of the day, who stripped Stan of his life membership before eventually restoring it at PSA Congress in 2004.

UNIONAID CALLS FOR DEMOCRACY IN MYANMAR

UnionAID is calling for donations to support workers facing oppression, displacement, and violence at the hands of the brutal military-led junta in Myanmar.

The push follows the shocking extrajudicial executions of four prodemocracy activists by the junta last month.

While not unexpected, these executions show the lengths the regime is willing to go to instill fear in anyone willing to resist it.

In a letter to Foreign Affairs Minister Nanaia Mahuta last year, the PSA called on the Government to oppose recognition of the junta at the UN, instead recognising the National Unity Government – made up of the democratically-elected MPs forced out by the coup.

Key points from the Kia Kaha Myanmar webinar:
🚩NZ and Australia must put pressure on ASEAN for real action.
🚩Sanctions on the junta family and businesses
🚩Aid and vaccines through civil society and the NUG pic.twitter.com/jE7lptoR0O

UnionAID is carrying out the vital work of supporting Myanmar’s workers – who are striking in opposition to the coup as part of the Civil Disobedience Movement (CDM) – by raising more than $39,000 to provide much-needed medicine and supplies to workers and their unions.

The CDM is one of the last bastions of popular resistance to the military regime. But one of the movement’s young leaders told UnionAID: “hope is now a luxury.”

You can show your solidarity with striking workers by donating to UnionAID’s local contacts, who help nurses, doctors, and teachers to support families fleeing the conflict.

You can visit UnionAID’s appeal page to donate.

The United Nations body threw out Business New Zealand’s complaint, based on the spurious accusation that FPAs are inconsistent with international conventions, paving the way for the legislation to move through Parliament.

PSA national secretary Kerry Davies says: “Now that Business New Zealand’s attempts to block FPAs by appealing to a respected international body have failed, we hope they will put aside their opposition and work constructively with Government and unions to promote fair working conditions for all.

“FPAs will set much-needed minimum standards, create healthier communities, and allow employers to attract and retain the workers they need.

“We all want our country to be a desirable place to live, work and do business. Fair Pay Agreements are a sensible step to make that a reality.”