"Our members have had enough" - MBIE/IR strike action

Thousands of PSA members around New Zealand walked off the job today in the first co-ordinated strike action in the public service for many years. 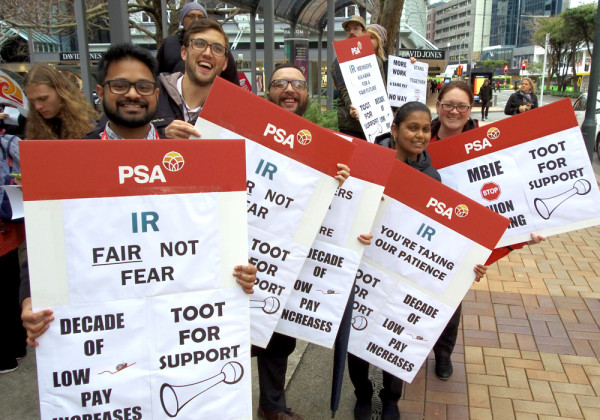 More than 4000 members at Inland Revenue (IR) and the Ministry of Business, Employment and Innovation (MBIE) held a two-hour strike in towns and cities around the country.

“For many of our members, this was the first time they had ever taken part in a protest – let alone industrial action,” PSA National Secretary Glenn Barclay says.

“It was inspiring to see their enthusiasm and energy as they stood together with their union colleagues in support of a fair deal.”

Members in smaller centres elected to do community work instead of rallying:

“We’ve heard IR were forced to close some regional front-line offices, and set up a separate 0800 number for people ringing to support our members,” Mr Barclay says.

“We hope today’s action gave them and MBIE pause for thought.

“Whenever the employers are ready to come back to the table and negotiate on these two issues, we will be glad to resume talks.”

A further two-hour stoppage is planned for July 23.