Unions Are Good For Your Mental Health

Te Mahinga Ora speaks to Vanessa Cooper, mentally healthy work specialist at WorkSafe
New Zealand, about why solidarity is good for your health.

Be more mindful, set personal boundaries, it’s okay not to be okay. Sound familiar? They’ve become the watchwords of HR departments across Aotearoa in recent years.

It’s easy to see why. Wage stagnation, worker atomisation, and job insecurity has led to a 22 per cent decline in the mental wellbeing of working New Zealanders since 2018.

Reluctant to examine their own complicity in this trend, some employers have been quick to push ‘self-care’ commodities like mindfulness apps and at-the-desk massages as the solutions to these deep-seated issues.

This reflex has become so ingrained it’s led to a $13 billion valuation for the self-care industry worldwide.

Perennial talk of ‘challenging stigma’ is cheaper than properly funding the NHS, building millions of council-owned properties or improving wages. & yet dealing with mental health as a form of purely privatised stress leaves us incapable of dealing with it as a social phenomenon.

But for Vanessa Cooper, mentally healthy work specialist at WorkSafe New Zealand, these measures do little to paper over the cracks.

“By reinforcing the idea of mental health as an individual problem – rather than a social issue – employers can ignore the real issues, doing more harm than good,” Vanessa explains.

While measures like these put the onus back on the worker, a new study – Exploitation as Structural Determinant of Mental Illness, published in the US Journal of Epidemiology – places the blame squarely at the employer’s door, revealing a direct causal link between mistreatment in the workplace and declining mental health.

The study claims the root causes of mental health can only be understood if we look upstream from factors like pay and conditions to the process of exploitation that gives rise to them.

Lead author Seth J. Prins told Jacobin Magazine: “People often are exploited above and beyond their wage. You can look, for example, at how many hours someone works. Many people work well above the standard forty-hour work week.”

This is particularly relevant for New Zealanders who work, on average, 2.3 hours a week more than the 31.9 hours per week in other OECD countries.

But if exploitation is key to our worsening mental health, the solution may be right in front of us: greater union membership.

Another study published in the American Journal of Industrial Medicine found that a 10 per cent increase in union density corresponded to a 17 per cent decrease in deaths by overdose or suicide.

This is partly because greater union density equates to higher wages and greater job security, but the study’s findings have wider implications. 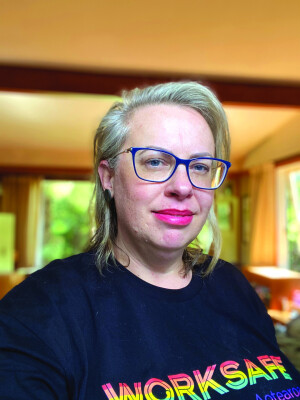 It’s an argument that rings true for Vanessa Cooper: “When we talk about mental health, we often think about illness. That becomes a biomedical conversation, when we need to think about it as a community issue.

“If you look at what leads people to high levels of stress, distress and suicide: it’s workplace issues, child custody battles, relationship break-ups, financial stress, it’s life. But we make it into a mental health thing. That really limits our ability to creatively problem solve, and look at what support a person, family or workplace needs to solve the problem.”

Are these the sorts of issues that unions can address? “I think so,” Vanessa continues. “Unions can create more mentally healthy work because they offer people peer-support and a way of addressing issues collectively, rather than as individuals.”

“We define mentally healthy work as people feeling seen, heard and valued,” Vanessa explains. “At its foundation it’s acknowledging people for the work that they do, and listening to them when they need to raise an issue.”

Vanessa says unions like the PSA are already working at a high level on mental health by connecting people’s mana to their pay and conditions and working collectively to bring people up together.

“The PSA has an advantage because the drive for the greater good is already baked into the public sector,” Vanessa continues.

“We want to resolve issues, and create more mentally healthy workplaces, so it’s easier for the next person who comes along.”