Launched in 2014, Worth 100% is our campaign for pay equity across the community, health, local government, public service, and state sectors.

The PSA Te Pūkenga Here Tikanga Mahi has a proud history of advocating for equal pay, striving for pay and employment equality for women since 1913.

Our work towards Equal Pay

Previous work in the Worth 100% campaign includes our work towards the Equal Pay Amendment Bill.

The PSA is taking a two-track approach to deliver on pay equity: using the force of new law to settle claims (the Equal Pay Amendment Act) and new guidance to end discrimination (the Gender Pay Principles and Guidance).

Kia Toipoto is the Public Service Action Plan (2021-2024) for closing gender, Māoei, Pacific, and Ethnic pay gaps.  Pay equity claims processes and Kia Toipoto, in combination, will address all of the workplace drivers of pay gaps.

Te Orowaru is a revolutionary new pay equity work assessment tool aimed to help recognise the value of cultural skills in work, including te reo Māori. This tool is the first of its kind in Aotearoa New Zealand and the first in the world with a key focus on indigenous peoples.

The pay equity assessment process allows us to look beyond what task someone is doing to understand and properly value work. Pay equity settlements are powerful vehicles for closing gender, Māori, Pacific and ethnic pay gaps, particularly for vulnerable workforces.

Gender Pay Gap Action Plans are another lever the PSA is using to address employment inequalities. These action plans aim to deliver on equal pay, flexible work arrangements, the elimination of bias in remuneration, and gender-balanced leadership.

It is through Gender Pay Gap Action Plans that the Gender Pay Principles (the framework for eliminating gender pay gaps) are implemented. They are a joint initiative of the PSA and government, in collaboration with agency chief executives.

Most public service departments have completed or are making action plans as required by Government. The plans are expected to make a real difference for women through improvements to starting salaries, the introduction of flexible work by default pilots, and changes to parental leave provisions.

Planning is underway to roll out the gender pay principles to the wider public sector, in line with the Public Service Act. The focus will continue to be on gender inequities but will now include ethnicity as well, working to address inequalities experienced by Māori, Pasefika, and other ethnic groups.

We are also seeking to spread the reach of the gender pay principles into all workplaces, no matter where our members work.

Representatives from the PSA's Te Rūnanga o Ngā Toa Āwhina, PSA Pasefika, and PSA members from other ethnic minority groups have helped develop the plan, alongside Te Kawa Mataaho, the Ministry for Women, Te Puni Kōkiri, the Ministry for Pacific Peoples, the Ministry for Ethnic Communities and employee-led networks.

The Gender Pay Principles Working Group is a tripartite working group of unions (including the PSA), agencies, and government, established in 2017 following a PSA legal claim of discrimination against the Public Service.

A set of guidance to implement the principles is now complete, following the publishing of guidance on remuneration, and career progression, breaks and leave. The PSA and Te Kawa Mataaho have developed the guidance in collaboration with other members of the Gender Pay Principles Working Group.

Equal Pay Advocates are PSA members (male, female, and non-binary) who are the champions of pay equity in big and little ways in their individual workplaces and homes. Several of our sister unions have similar groups of members championing equal pay in their workplaces and our combined efforts can get the whole country behind us and achieve 100% equal pay in the next few years.

We're pushing for equal pay across our union through a number of pay equity claims. Our union wide strategy can be seen in the raising of claims for NGO social workers and social services workers at five not-for-profit providers. We’re also pursuing our claim for library workers in local government.

The PSA pay equity claims are each at various stages in the process: Raising the claim, Accessing the Claim and Settling the claim.

Our claims in progress:

For more information about a claim in your workplace, log in to MyPSA and look under My Sector and/or My Employer for updates to specific claims.

Find out about your claim:

Having fought for equal pay for over a hundred years, there are many moving parts involved in the campaign for equality. Explore the headings below for more information.

The terms “Pay Equity and “Equal Pay” are often confused. Equal pay means two people who are doing the same job should be paid the same regardless of their gender. Pay Equity means that women and men should be paid equal pay for work of equal value.

The gender pay gap is the difference between the average hourly rate for women and for men. It’s closing at a snail’s pace, and we’ve still got a long way to go.

Women graduates are paid, on average, 6 per cent less than their male counterparts at the very start of their careers. Within four years, they are earning nearly $5,000 a year less and the gap continues to widen.

In the public sector, women are paid 14 per cent less than men but it’s an average that conceals massive pay gaps, up to a staggering 42 per cent at the Ministry of Defence. In the community public services sector, support work is paid around one-third less than work with similar levels of skills and qualifications but largely done by men.

The gender pay gap represents a huge loss of earnings over a working life that can severely limit a woman’s choices and those of her children. It can mean the difference between a comfortable retirement and scrimping on food and heating costs.

The arrow diagram below was developed to demonstrate the steps involved when working through the pay equity process. The pay equity arrow diagram does not describe a linear process where one step must be completed before another is started. (From the Te Kawa Mataaho Public Service Commission's Pay Equity Work Assessment Process Guide)

Pay equity bargaining is different from the processes we normally use for MECA bargaining. This bargaining will be led by a Crown Negotiator who has been appointed by the Government for this purpose, assisted by DHB representatives. The Oversight Group comprising representatives from SCC Treasury, Prime Ministers Office and Ministry of Health will also oversee this process.

The other feature that is different from the normal MECA bargaining process is that that we have jointly, with the DHBs, worked through a very long process to complete the assessment of 13 roles that are representative of the work our clerical admin members do in the DHBs. We have also completed the assessment of the comparator roles and have determined that there is comparability between the work of our clerical admin members and the comparator roles.

We have also collected remuneration data for both the claimant and the comparators and by analysing this data it has been established that, on average, the claimant roles are undervalued. We will be negotiating to remediate the undervaluation.

We have identified the following broad issues that we will want dealt with through this bargaining process:

The three main stages of the pay equity claim process are:

Click on the graphic below to expand our Steps to pay equity poster, or read the Pay Equity Work Assessment | Process Guide (pdf) here for more information. 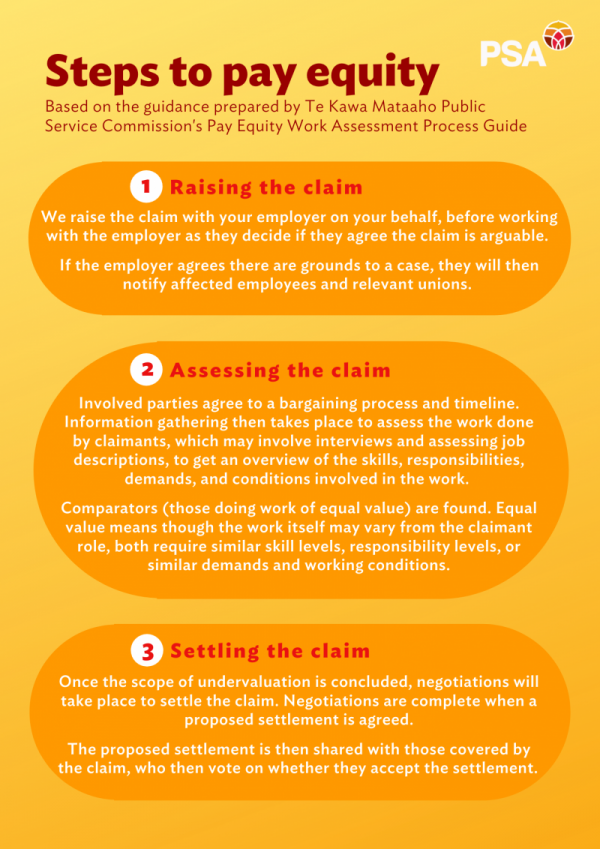 The Equal Pay Amendment Act (2020) introduces a practical and accessible process to raise and consider claims of systemic sex-based pay undervaluation in pay in female-dominated occupations.

Introduced to Parliament on 19 September 2019, it passed its third reading in July 2020 before coming into force on 6 November 2020.

The new law enables unions to raise and pursue equal pay claims directly with employers, using a process aligned with New Zealand's existing bargaining framework, rather than going through an adversarial court process. By making court action a last resort, the approach lowers the bar for workers initiating a pay equity claim, and uses a collaborative process more familiar to unions and businesses.

Under the Act, employers, workers and unions negotiate in good faith, with access to mediation and dispute resolution services available if they are unable to agree.

For PSA members who work in female-dominated occupations, this Amendment to the Equal Pay Act of 1972 facilitates achievement of pay equity – similar pay for similar skill level across differing occupations - through a standard job evaluation or job assessment process.

Every year, more than 100,000 New Zealanders are made redundant, laid off, or have to stop working b…

Advice for members about workers' rights during the COVID-19 outbreak and vaccine mandate rollout.

In an historic milestone for the PSA, Te Rūnanga o Ngā Toa Āwhina has taken a claim to the Waitangi …

Let's Do Even Better

Let's Do Even BETTER is our campaign for the Aotearoa Wellbeing Commitment.