Through MyPay PSA members can dig down into our pay survey data to find out more about pay for specific jobs and job categories. As a member-only tool, MyPay access requires logging in to MyPSA.

MyPay was built by the goodwill and collective spirit of thousands of PSA members who shared their salary data in the spirit of working together for a fairer, more transparent pay system for all.

Why pay transparency is important

Up until now, pay data has been used by employers to inform employer decision-making, rather than being available to workers to inform theirs.

There is no doubt data about pay rates is a powerful thing, but for too many workers it’s been out of reach. For too long PSA members have been making big decisions about their careers without full information.

Not a member yet but want to access MyPay? Become a member today!

Through MyPay PSA members can dig down into our pay survey data to find out more about pay for specific jobs and job categories.

The data behind MyPay can also help us answer some big questions about pay across the public and community sector organisations where PSA members work.

This chart shows what proportion of people are paid what level of salary in $10, 000 bands.

This is higher than the median 2019 full time salary ($53,000) in the overall New Zealand workforce. This does not mean that pay rates are higher in the public than in the private sector. The higher median salary for jobs in the PSA’s areas of coverage reflects the greater requirement for higher qualifications than in the overall workforce.   People working in public and community services are also on average older and have more work experience than the overall New Zealand workforce. 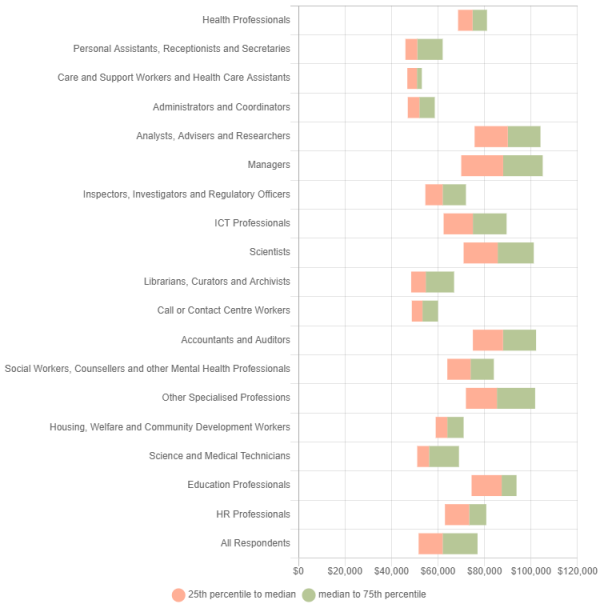 This chart shows the range of what people are paid across the main occupational groups that PSA members work in. Each of these groups is made up of a number of jobs – PSA members can dig into pay for each of these jobs in MyPay. 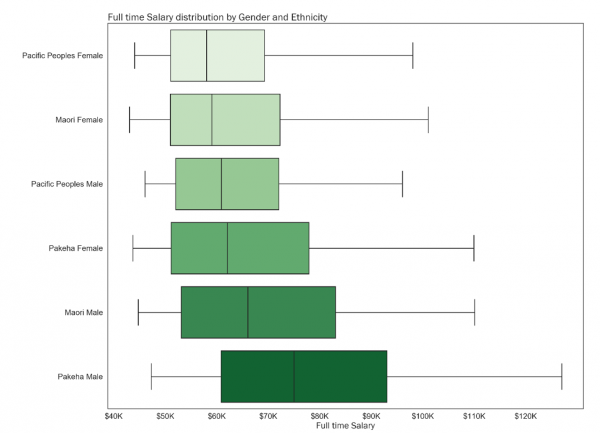 For each group, 25% of people are paid below the coloured box and 25% are paid above it. 50% are paid within the box and the line in the middle of the box is the media

Over 80, 000 people are members of the PSA. Around a third work in Auckland, a third in the Wellington region and a third around the rest of the country. They work for: DHBs in admin, allied and technical professions; Public Service departments; other State services – crown entities, SOEs etc; for local councils; and in community public services – contracted providers (disability, health and social services).

This tool is thanks to members and for members. You need a MyPSA login to use the tool. While we will make information explaining the tool public, the data itself is intended to be used by members. If you don’t yet have a MyPSA login, you can register for this from the MyPSA link on the front page of the PSA website. You just need your PSA member number. You’ll find this in the subject line of the last monthly PSA News newsletter emailed to you from update@psa.org.nz.

A September 2019 pay survey of PSA members. 27, 000 PSA members shared their pay information and we have used this to build the tool. We plan to run future pay surveys to keep the information current and make it even more useful.

The work our members do is varied. Official job titles often don’t describe the work that the jobholder does, so we’ve used the Australian and New Zealand standard classification of occupations (ANZSCO) system. We have adapted some of the descriptions to be as functionally descriptive as possible. We’ve tried to strike a balance between providing enough detail while reducing the overlap between occupations. If you enter your job title in the search function you will see the occupations that are most frequently associated with the given job title.

It’s because we didn’t have enough data for that to display it with accuracy. We’ve used StatsNZ standards to decide when we have enough data to display for each particular item. Next time we run the pay survey that feeds this tool please encourage your colleagues to do it so that we have even more data next time round and can show more.

Having information available about pay helps people make decisions about what jobs to do, what career moves to make. It let’s you know whether or nor you are being paid fairly and uncovers unlawful pay discrimination. The PSA supports the Human Rights’ Commission’s campaign for pay transparency.

Only PSA members can access the tool. If we had genuine pay transparency, leaders and HR professionals would also benefit. It would support better workforce planning, make clear career pathways and shine a light on systemic problems. Organisations can then make more informed decisions about equal pay, bargaining and workforce strategies.

You can ask your employer for information about pay for your role or in your organisation but they have no obligation to share it. Pay rates for public and community sector jobs are not publicly available in New Zealand. Employers provide this information to private salary survey companies and then buy pay rate and movement reports based on this information. This information is not available to individuals or to the unions negotiating their pay.

We can use the data in behind this tool but the data displayed in the tool is not detailed enough for this purpose. It can though help us identify key issues and know which questions to ask. In preparing to negotiate pay on behalf of its members in an organisation, your PSA advocate can request detailed pay information from that employer. This is the level of pay information needed for collective bargaining.

We don’t have the capacity to provide this. There is a lot of information available in the tool and we’d encourage you to take a look at the advanced view function.

The PSA holds a number of Annual Members' Meetings in every* workplace, which all members of the PSA…

The role of delegates

PSA delegates are at the heart of the way we work. They are elected by members as union leaders in t…

We're lucky to host a number of webinars and seminars on various subjects with insightful speakers.

Download or order posters to raise union visibility in your workplace.

Resources for Delegates and Members

From PSA signage to delegate nomination forms, see our selection of useful resources for members and…

Download and read copies of the PSA's annual and financial reports.

Briefings to the Incoming Ministers

Information about PSA membership fees and the 2021 fee restructure.

Keep your contact information up to date, explore member benefits, or use our direct support line - …

Writing and presenting a personal submission